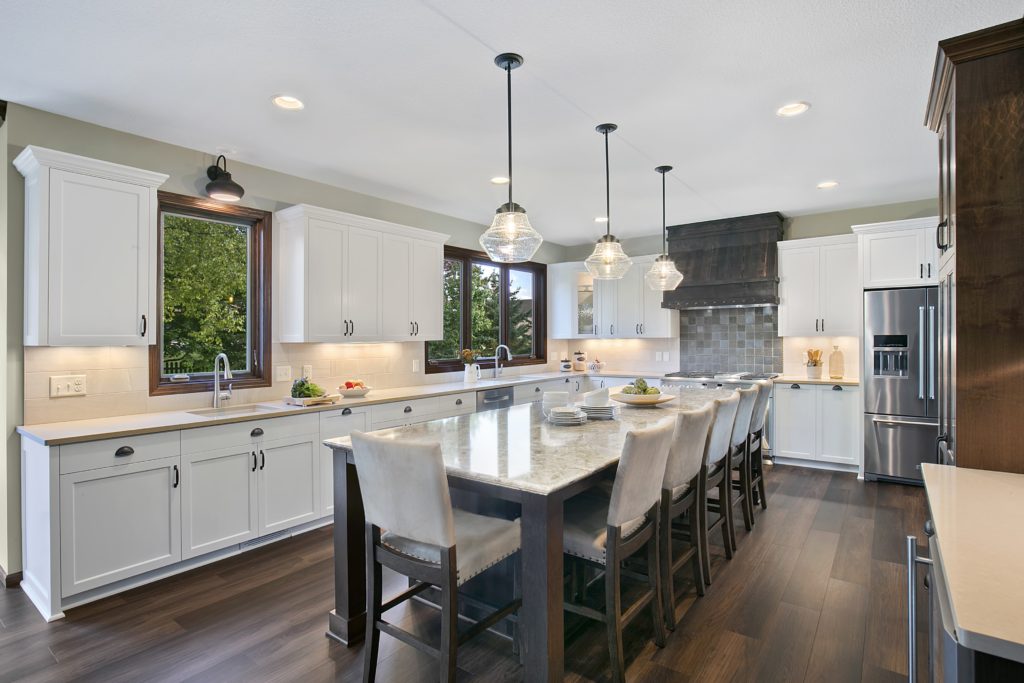 The Parade of Homes Remodelers Showcase is just around the corner, and we are so excited to have two of our home remodeling projects featured this year. Read more about these two projects, and then come see them in person Friday, March 23 – Sunday, March 25th from noon to 6:00 pm! 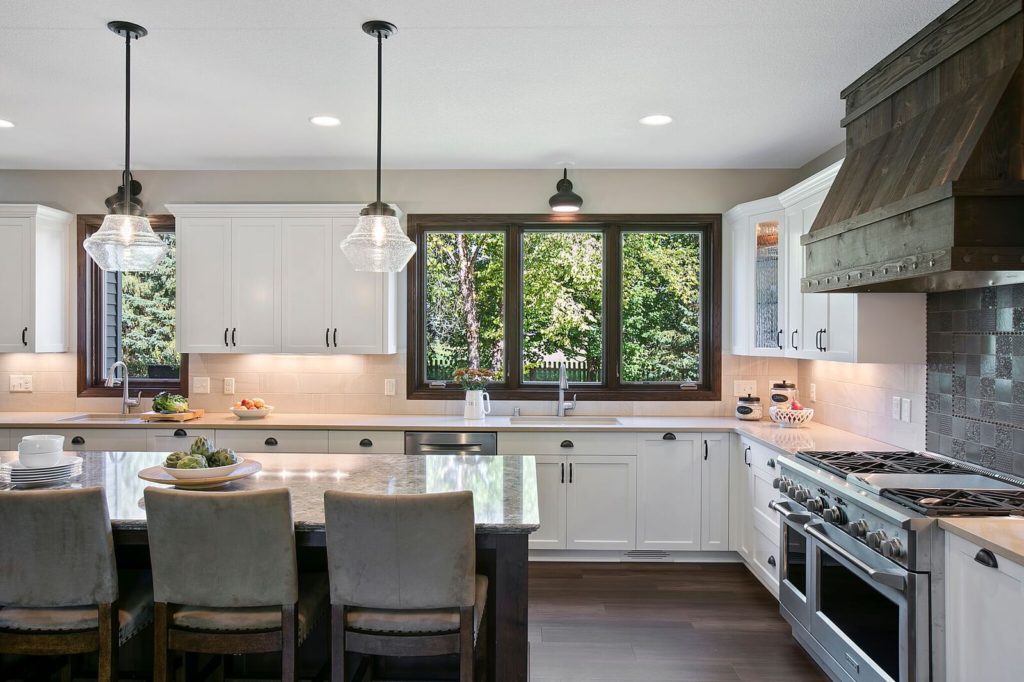 The Andersons moved into their Bloomington home in 2011, and fell in love with the central location, established neighborhood, and nearby wooded trails and parks. As their family grew, however, the main kitchen area started to feel smaller and smaller.

“There were times when all four humans and a large dog would be crowded into two feet of space in the corner of the kitchen,” Becky said. “We also had extremely limited counter space and felt like we were right on top of the family room. I knew I wanted the wall to come down between the kitchen and the dining room. It was all I could talk about for years before we actually did it!”

With a cramped kitchen and unused formal living and dining spaces, the Andersons started considering their options. “We didn’t have any plans to move or build our own home, so we decided we wanted to make our house work for us.”

Becky found out about James Barton Design-Build from a few sources. On a walk one morning with her dog, she saw a JBDB trailer out in front of a home. “The picture on the side of the trailer looked exactly like what I had been thinking about for our house.” Becky’s cousin had also renovated their kitchen a few years prior and had used JBDB for the project. “It’s incredible! I asked my cousin who they had used and she said JBDB and gave them a glowing recommendation! After that, there was no question who we would use.” 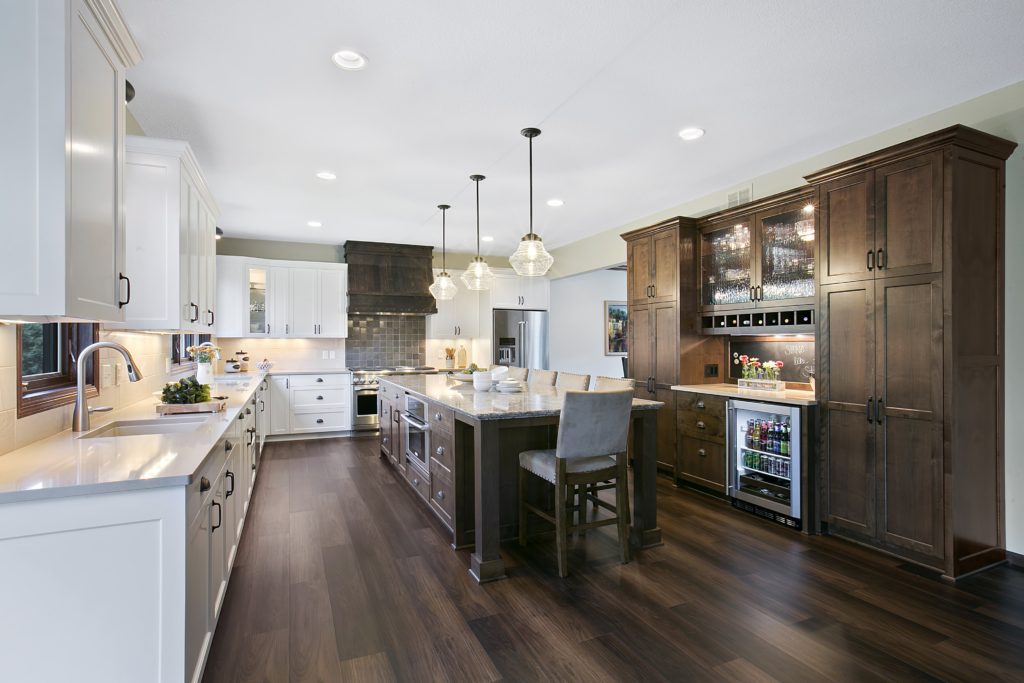 To update the small, dark kitchen, the Andersons discussed their needs with the design team at JBDB. Using pictures from remodeling magazines and Pinterest as a starting point, the couple addressed specifics that they wanted and JBDB designer Emily Thull worked with them to bring their ideas to life and make the new kitchen design fit in with the rest of the house.

“Emily listened to us to understand what our life is like and looked at the pictures to get an idea of what we wanted,” said Becky. “Emily made it really easy for us. She was so easy to work with, friendly, helpful and clearly confident in her abilities. It felt like we got so much more than a designer; we had a friend helping us out! We also enjoyed using the showroom. It allowed us access to a lot of variety without having to go to multiple stores.”

“We selected JBDB because we wanted a team that was going to be with us throughout the process and that we could rely on later if anything went wrong…We appreciate knowing we have them on our side.” 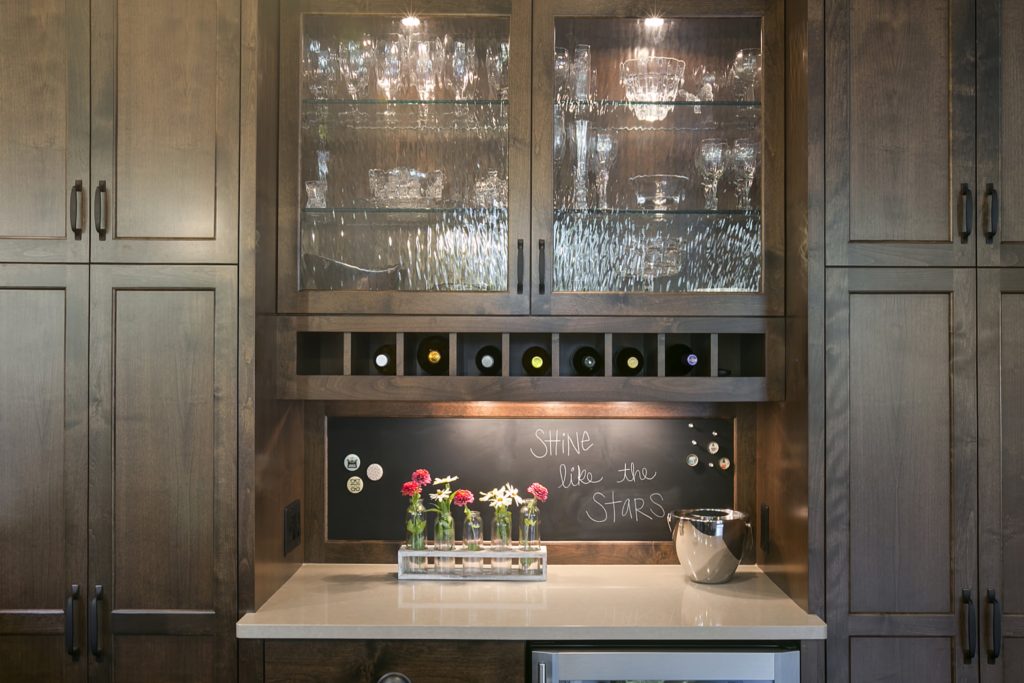 The nine-week remodel maximized space by combining the unused formal dining room with the kitchen to create a large kitchen space for their family and for entertaining. Cambria countertops on the spectacular 11’ island created a perfect place for family and friends to gather. “We have had a few parties where people are actually able to be together in the kitchen; there is enough space for everyone,” Becky said.

Beautiful stained alder cabinetry was used on the island as well as at the beverage/message center; the off-white enameled perimeter cabinets balance the richer stained wood and provide ample storage. The show-stopping custom-designed vent hood frames out the 48” gas range and creates a stunning focal point for the kitchen.

Becky said, “We have a lot more space in our kitchen now and can actually use the island for eating rather than only cooking and mail storage! Working with the design team made what could have been a stressful and overwhelming process really fun, and the small details they have in place make all the difference. 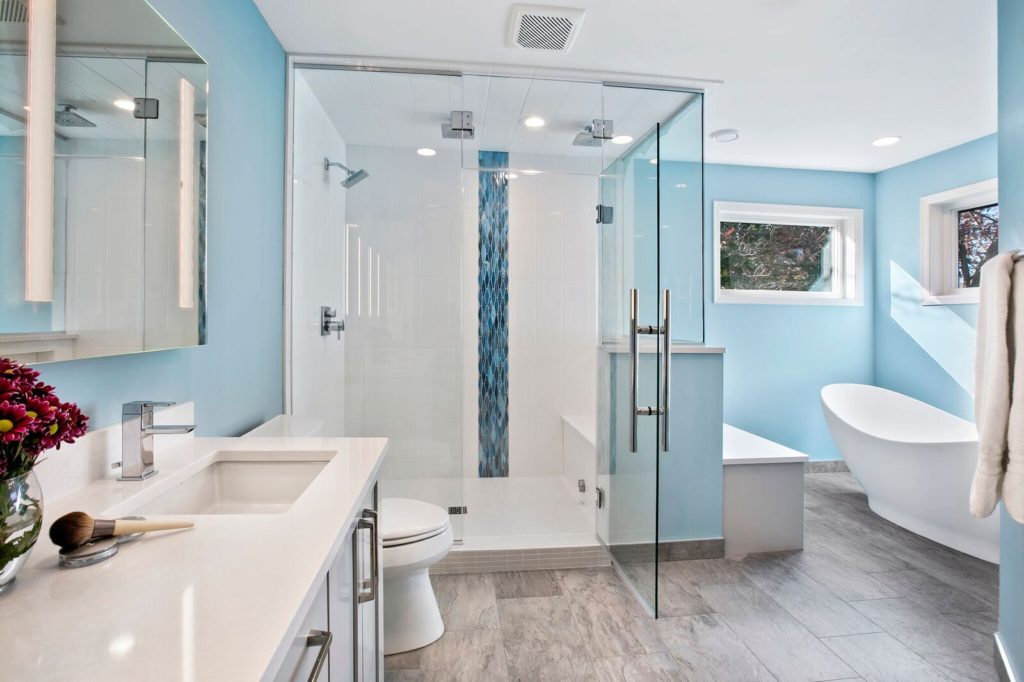 The de Leon family purchased their Eagan home knowing that it needed some significant updating. But the layout, location and surrounding neighborhood drew the de Leons to the house, and they could see the home’s potential.

After completing a previous remodel in 2012, the de Leon family decided to redo their family room, deck, windows, fireplace, and upper level hallway bathroom and master bathroom. “We decided to do the bathrooms and upstairs windows at the same time so we would be finally ‘done’ rather than splitting up the two projects,” said Michael.

The home, built in 1987, had popcorn ceilings, golden oak wood, and dark brown tones throughout. “Our home was so dark – definitely not enough windows to let the light in,” Michael said. “Our home is surrounded by mature oaks and other beautiful greenery, but you could hardly see any of it due to the lack of windows and large deck that blocked the view of our backyard.” 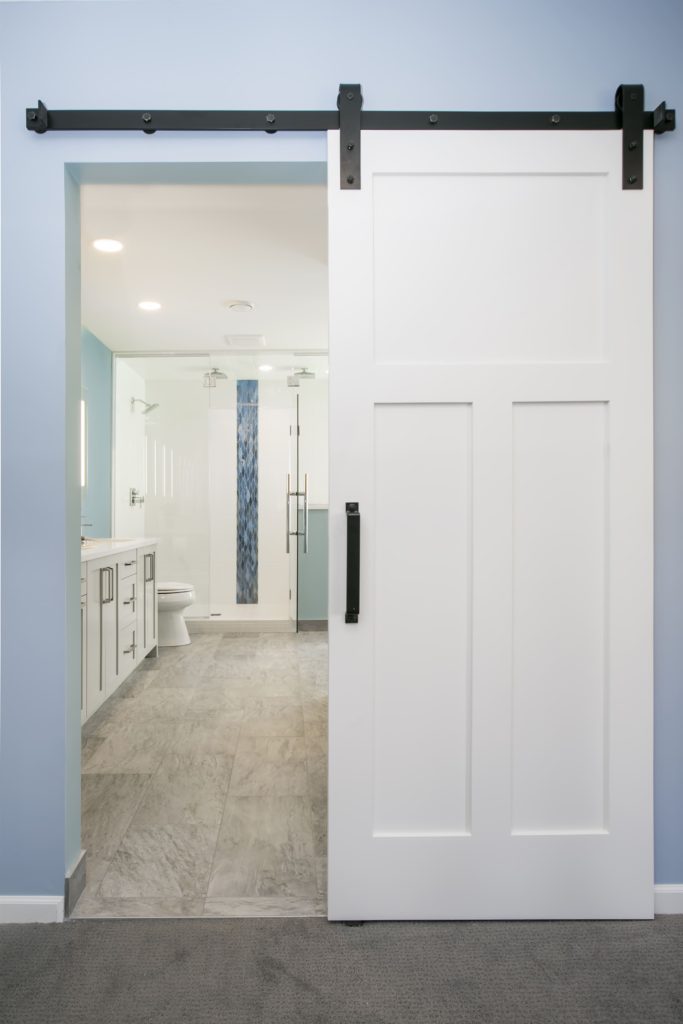 Neighbors had used the JBDB team for a kitchen remodel, and after meeting the JBDB staff at an open house, the de Leons decided to work with them on their own renovations.

“The planning process was impeccable. Every single detail was worked out before the project began. There were no last-minute, in the moment decisions,” Michael said.

The de Leon family upgraded their master bathroom, adding in Cambria countertops, a custom closet, and a steam shower with a rain head. The JBDB team also brought in plenty of natural light to the main floor with large windows.

The finished product not only increases the time the family spends together on their main level, but it helped update the overall look of the entire home.

“The project was beautifully done, the team was great to work with, and the process was incredibly efficient from start to finish,” Michael said.

For more information about seeing these homes in person, click here. Contact the home renovation experts at JBDB to get your next remodeling project underway!

Get Inspired by These Kitchen Island Trends